When I was in my early 20s (incidentally which was just a few short years ago), I chanced upon this wonderful American Family recipe book in a library. I can’t remember which library it was, but I do remember the constant reminders to return the book. I loved many of the recipes inside – one of them, Buttermilk Fried Chicken, that I couldn’t bear to return the book. But my conscience was pricking me and a few months later, I decided to go to the library, pay up the outstanding fines, and then, sheepishly, told the librarian I had lost the book. The librarian, a woman in her early forties, looked at me sceptically. She gave a small smile, said she’ll check out the actual cost of the book, and ten minutes and fifty plus dollars poorer later, I went back home. I walked away feeling happy that I had paid for the book that I so badly wanted to keep (and stomped on the little angel who kept whispering what a liar I was).

Each time I felt a Southern fried chicken craving (this was before the days of Popeye’s), I would go down to Cold Storage and buy a carton of buttermilk to fry my chicken. Yesterday, since I already have a carton in my fridge, I decided to go Southern. 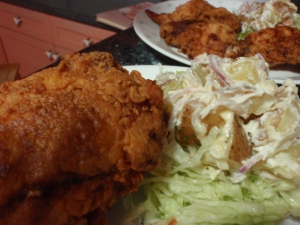 Honestly, one whole chicken is not enough for even two so I’d suggest using two whole chickens for more than two people. (The chickens here are pretty small anyway) ;p