On Saturday, I didn’t marinade it. I simply put salt and plenty of black pepper, browned the meat and put it in the oven. I’ve never cooked rack of lamb before and it was a pleasant surprise when I found out that it was a relatively simple meat to prepare; the pieces came off easily with a swipe of the blade.

I baked it in the oven until it was still quite rare. I didn’t want an overcooked meat but it was too rare for The Hubby and so I  toasted his portion in the toaster. I served it with Greek yogurt drizzled with good quality honey, a salad and fried butter rice with sausages and raisins. It was a delicious lunch but one I suppose laden with so much fat because immediately after eating, I had a dull throbbing in my head for a few hours. 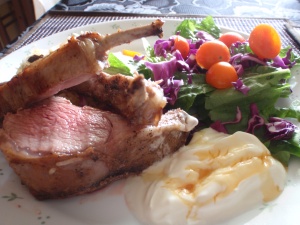