I am convinced that food unites people because there are many similar foods that every culture seems to call their own. I am pretty sure the interaction between communities has resulted in an exchange of wonderful ideas, and then adaptation.

When I first came across this, the first thought that came to my mind immediately was ‘bergedil’! ‘Begedil’ or ‘perkedil’ is a Malay/Indonesian potato patty made by frying and mashing these fried potatoes and then forming patties with the addition of fried minced meat and fried onions, is a favourite in this part of the world. Interestingly, ‘bergedil’ was introduced by the Dutch when they colonised Indonesia. The Dutch has a version of this called ‘frikadeller’. And now, I’m learning that the Moroccans also have their potato version, sans any meat.

I think the Moroccan version is much healthier. Instead of frying the potatoes, they boil them and mash them fine with spices and egg. Patties are larger and flatter. And they serve these maakouda in between bread (or eaten on its own). 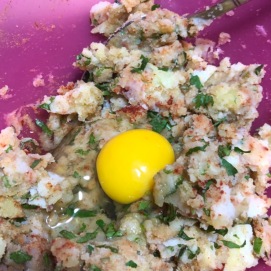 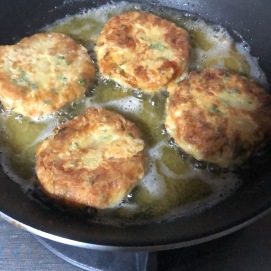 I did not take a picture of the finished product on a plate because once they were off the pan, very quick hands snatched them and they were gone in seconds!

My version of the maakouda recipe

Form into patties, and then before frying, dust with plain flour and dip in beaten egg. Fry till brown and crispy.